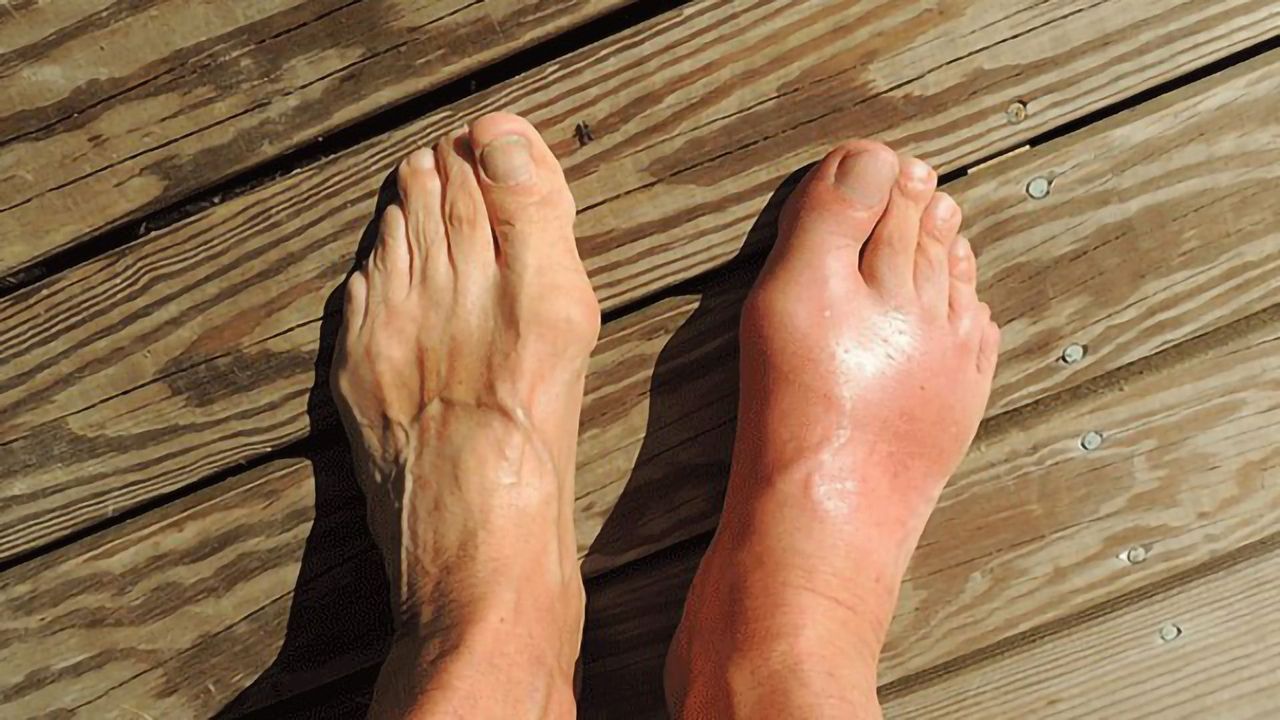 >>Intensely painful, swelling joints (most often in the big toe or other part of the foot) and/or bouts of arthritis that come and go may indicate gout.

>>Gout treatments exist, but therapy should be tailored for each person. Treatment choices depend on kidney function, other health problems, personal preferences and other factors.

>>Patients may need medications to lower their elevated blood uric acid levels that predispose to gout. The goal is a uric acid level less than 6 milligrams per deciliter (mg/dL).

>>There are two types of medicine for gout. For control of acute attacks of joint pain, there are NSAIDs, colchicine and corticosteroids. After gout flares have resolved, there are medications that can lower the level of uric acid over time in order to prevent or lessen attacks.
>>Lifestyle changes such as controlling weight, limiting alcohol intake and limiting meals with meats and fish rich in purines also can help control gout.

Gout is a painful and potentially disabling form of arthritis that has been around since ancient times. It is sometimes referred to as the “disease of kings,” because people long have incorrectly linked it to the kind of overindulgence in food and wine only the rich and powerful could afford. In fact, gout can affect anyone, and its risk factors vary.

The first symptoms usually are intense episodes of painful swelling in single joints, most often in the feet, especially the big toe. The swollen site may be red and warm. Fifty percent of first episodes occur in the big toe, but any joint can be involved. Fortunately, it is possible to treat gout and reduce its very painful attacks by avoiding food and medication triggers and by taking medicines that can help. However, diagnosing gout can be hard, and treatment plans often must be tailored for each person.

Gout occurs when excess uric acid (a normal waste product) collects in the body, and needle‐like urate crystals deposit in the joints. This may happen because either uric acid production increases or, more often, the kidneys cannot remove uric acid from the body well enough. Certain foods and drugs may raise uric acid levels and lead to gout attacks.These include:

Some medications, such as:

>>low-dose aspirin (but because it can help protect against heart attacks and strokes, we do not recommend that people with gout stop taking low-dose aspirin

>>certain diuretics (“water pills”) such as hydrochlorothiazide and furosemide

>>immunosuppressants used in organ transplants such as cyclosporine and tacrolimus

Over time, increased uric acid levels in the blood may lead to deposits of urate crystals in and around the joints. These crystals can attract white blood cells, leading to severe, painful gout attacks and chronic arthritis. Uric acid also can deposit in the urinary tract, causing kidney stones

Gout and its complications occur more often in men, women after menopause, and people with kidney disease. Gout is strongly linked to obesity, hypertension (high blood pressure), hyperlipidemia (high cholesterol and triglycerides) and diabetes. Because of genetic factors, gout tends to run in some families. Gout rarely affects children.

How is gout diagnosed?

Some other kinds of arthritis can mimic gout, so proper diagnosis (detection) is key. Health care providers suspect gout when a patient has joint swelling and intense pain in one or two joints at first, followed by pain‐free times between attacks. Early gout attacks often start at night.

Diagnosis of gout can be made in several ways. Gout is often diagnosed upon the finding of uric acid based crystals. The physician may use a needle to extract fluid from an affected joint and will study that fluid under a microscope to find whether urate crystals are present. Crystals also can be found in deposits (called tophi) that can appear under the skin. These tophi occur in advanced gout.

Gout can also be diagnosed based on the pattern of joint involvement, characteristic symptoms, time course, blood tests for uric acid, and advanced imaging tests.

Uric acid levels in the blood are important to measure but can sometimes be misleading, especially if measured at the time of an acute attack. Levels may be normal for a short time or even low during attacks. Even people who do not have gout can have increased uric acid levels.

How is gout treated?

One treatment for active gout flares is colchicine. This medicine can be effective if given early in the attack. However, colchicine can cause nausea, vomiting, diarrhea and other side effects. Side effects may be less frequent with low doses. Patients with kidney or liver disease, or who take drugs that interact (interfere) with colchicine, must take lower doses or use other medicines. Colchicine also has an important role in preventing gout attacks.

Nonsteroidal anti‐inflammatory drugs – commonly called NSAIDs – are aspirin‐like medications that can decrease inflammation and pain in joints and other tissues. High doses of short‐acting NSAIDs give the fastest relief of symptoms. These medicines may cause stomach upset, ulcers or diarrhea, but they are well tolerated by most people when used for the short term.

In patients with chronic undertreated gout crystals can be found in uric acid deposits (called tophi) that can damage joints & can appear under the skin. Corticosteroids, such as prednisone, methylprednisolone, and triamcinolone, are useful options for patients who cannot take NSAIDs. Given orally (by mouth) or by injection (shot) into the muscle, these medicines can be very effective in treating gout attacks. If only one or two joints are involved, your doctor can inject a corticosteroid directly into your joint.

Some home remedies may help ease gout pain and reduce flares. Cherry products such as whole cherries or unsweetened cherry juice may reduce gout flares. A glass of skim milk daily may also help to lower uric acid over time. During an attack, rest the affected joint and apply ice packs or cold compresses (cloths soaked in ice water and wrung out) to that spot.

Patients who have repeated gout flares, abnormally high levels of blood uric acid, or tophi or kidney stones should strongly consider medicines to lower blood uric acid levels. These medications do not help the painful flares of acute gout, so most patients should start taking them after acute attacks subside. The drugs most often used to return blood levels of uric acid to normal is allopurinol & febuxostat. They block production of uric acid.

Probenecid help the kidneys remove uric acid. Only patients with good kidney function who do not overproduce uric acid should take these therapies.

Gout flares often can occur when you first start to use medications that lower blood uric acid levels. Patients can help prevent flares when starting these medications by also using low‐dose colchicine or NSAIDs. Often, doctors advise patients to keep taking colchicine in a low, preventive dose together with the uric acid-lowering medicine for at least six months.

If you are taking a uric acid-lowering drug, your doctor should slowly raise the dose and keep checking your blood uric acid levels. Once your uric acid levels drop below 6 mg/dL (normal), crystals tend to dissolve and new deposits of crystals can be prevented. You probably will have to stay on this medicine long term to prevent gout attacks.

What works well for one person may not work as well for another. Therefore, decisions about when to start treatment and what drugs to use should be tailored for each patient. Treatment choices depend on kidney function, other health problems, personal preferences and other factors.

What you eat can increase uric acid levels. Limit the amount of high-fructose drinks, such as non-diet soda. Also, do not drink alcohol, especially beer. Restrict eating foods that are rich in purines, compounds that break down into uric acid. These compounds are high in meat and certain types of seafood. New research has found purines in vegetables appear to be safe. Low‐fat dairy products may help lower uric acid levels.

In almost all cases, it is possible to successfully treat gout and bring a gradual end to attacks. Treatment also can decrease the number and size of tophi (deposits of uric acid crystals).

Gout affects quality of life by both the intermittent attacks and the potential for chronic (lasting) arthritis. Compliance with your treatment plan is critical. Lifestyle changes may make it easier to manage this lifelong disease. Suggestions include gradual weight loss, avoidance of alcohol and reduced consumption of fructose‐containing drinks and foods high in purines.